The sauce is a key element of every enchilada dish, with no exceptions. We can go as far as to say that it is not an enchilada dish without it’s unique, distinctive sauce. That’s why if you don’t have time to prepare one, which a lot of us don’t because it is a bit time demanding while we are very busy adults, your choice has to be curated as to result in that perfect beloved dish.

But for better or worse, canned food is there to save our busy, miserable lives. Whether you’re a daily consumer of Canned Chicken, a lover of Canned Sardines, or just occasionally go with Canned Clam Chowder, Canned Corn, Canned Crab Meat, or Canned Tuna, you can’t deny the fact that we’d be lost if not for those foods. I mean, with canned dishes, eating a rich, full meal is only a matter of keeping the Can Opener or Can Crusher nearby. Furthermore, if you’re in college and can’t get a Compact Refrigerator for one reason or the other, canned food becomes one of the College Kitchen Essentials.

This situation which we all sometimes go through is what inspired us to make this review in order to give you an idea about what is available in the market, so your next purchase of enchilada sauce will be without any regrets! Take note that we focused on the red sauce because it’s the traditional one, although most of the brands mentioned thereafter also make the green varieties as well.

Comparison And Ratings Of The Best Canned Enchilada Sauce

Now that you’ve seen our top 5 recommendations, we’ll give you more detail on each of them, including why we liked them. When you’re ready, click the yellow button to get the best price on Amazon!

The American brand Rosarita is in the Mexican food business since the forties.

Unlike the previous specimens, this sauce puts tomato paste on the top of its’ ingredients list. Red chili is puree is listed alongside it as well, contributing to that tingly fresh chili taste. It also contains some natural gums that act as stabilizers.

Chefs and cooking enthusiasts generously applaud its’ refined taste, a grand number of them agreeing that it makes for the most exquisite dishes, whether at home or even at restaurants. They also emphasize its’ layered flavor and low acidity-level.

Do not let the fact that this sauce comes last on our list deceive you. Rosarita’s Mild Enchilada Sauce is a renowned product adored by millions both in America and outside of it. The refined taste along with the fresh ingredients makes it one of the best enchilada sauces out there. 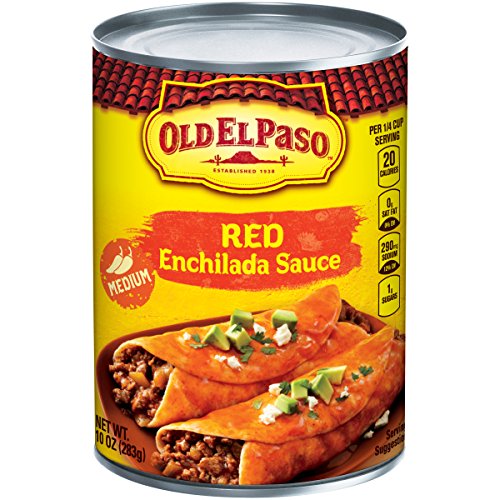 This brand is a family brand using recipes passed down through the generations of the family that the five Mexican-American women who started the business in 2005 belong to.

The sauce is characterized by a lightly spicy taste due to the tomatoes not being a central ingredient, letting the tingling aromas prevail during the gustatory experience. More importantly, it contains a chicken stock taste that adds an interesting layering to its’ savor, though it prevents it from fitting in vegetarian meals, in addition to cumin and garlic chunks.

Albeit rather pricier than other similar products, it has an authentic homemade taste which makes it all that more appealing.

Mostly its nostalgic taste. Old El Paso Enchilada Sauce has an excellent flavor that would leave you striving to get more. If you like a reasonable price tag, you should definitely go with this canned enchilada.

Hatch, widely-known for its’ salsas, is an American brand that started in New Mexico.

One of these sauce’s main ingredients is tomatoes of course, alongside dehydrated chili powder, a staple that gives it its’ signature red enchilada taste. Using this enchilada brand, you don’t have to keep any Canned Chili or Canned Tomatoes in your kitchen (not really).

It is MSG-free, but the ones who are sensitive might be triggered by some of its’ similar components.

This brand’s sauce is often classified as having a mellow, classic flavor and for that, it is recommended on forums and blogs that specialize in cooking and food.

Hatch Medium Enchilada Sauce is an excellent brand that offers a classic flavor all while following the modern health guidelines to deliver an unbeatable experience when it comes to canned enchilada sauce.

El Pato sauces have been produced for 80 years by Walker Foods, and it is yet another Mexican sauce brand from California. If you have a Mexican Cookbook around, it’s time to get it.

This red Chile enchilada is actually a simple sauce, rather than a complex one, so the real chilis that are not in powder form used in it really take the front stage alongside tomato puree which listed first on the ingredients list. And this is exactly what makes it so special, and what reviewers and consumers alike praise it for. They also adore its’ apparent simplicity, ingredient-wise, and absence of preservatives, which is a major plus. Moreover, it further stands out from other sauces with the freshness in its’ taste, due to their use of entire chilis instead of powder.

The only minor thing that might be inconvenient is its’ abundance in big, 28 oz. It can form, and not in smaller sizes. So, you’re most likely going to have to freeze the leftovers in your Chest Freezer, as it’s a too large quantity for preparing one meal. That or you can send them to the Garbage Disposal, but who would get rid of such beauty?

What we really dig about this enchilada sauce is how they include the whole chilis to preserve the fresh taste for the longest periods. It is a simple sauce with simple ingredients, and it doesn’t come with preventives. Better yet, the big can isn’t really a problem since you can save the leftovers so you can use them later. If that’s not a good sauce for you, I don’t know what is.

The Basics of Enchilada

Enchiladas are in fact a savory, spicy street food meal that originates from Mexico. It is made with flour, or corn tortilla that’s rolled around a filling then engulfed with chili sauce and cheese and put into the oven. The filling may consist of different ingredients, such as meat, beans, potatoes, and veggies. It is a highly popular dish, mainly throughout Mexico. Red chili peppers consist typically the main ingredient of the thick sauce, but also green peppers can be used as well.

Enchiladas is known as a delicious dish undoubtedly, but it’s also a fantastic meal for incorporating leftovers, thanks to it being highly versatile, for example, u can include your chicken or meat leftovers, add some vegetables to them, and you’re good to go.

Having canned enchilada sauce is handy for a fast dish like this to make it on the fly without much thinking. And here’s a small tutorial on how to make it at home:

The Sauce Can Make It or Break It

The typical enchilada sauce recipe starts by preparing a roux-type base to which you then add spices, mainly chili powder and an adequate amount of tomato paste. You will end up at this stage with a thick, albeit creamy and smooth sauce full of flavors. The norm is to make it using red chillis, but green chili sauces are viable also.

Chilli peppers are traditionally the primary ingredient, even though more often than not tomatoes take that role because they are cheaper. However, this is among those really varied dished so the way you make it and what you use in it depends on your taste and the availability of ingredients.

In general, it’s a simple meal so the taste of the elements will stand out. That’s why their quality should be high in order to guarantee the deliciousness of such a rich mix of flavors. This also applies when dealing with canned sauces, so don’t settle for less in such a situation.

You May Now Start Cooking

There are too many wonderful options for a canned enchilada sauce. What you choose, however, might depend on the situation, because when you’re having guests, for example, you’ll definitely want your sauce to have a top-notch natural taste, while in a family meal, you may reach for that canned sauce for an easier process. But at least, thanks to this article, you won’t be disappointed in the taste ever again!