Kegerator, a portmanteau of the words “keg” and refrigerator”, is an appliance that keeps a keg chilled. Its primary purpose is to dispense beer at the right temperature. Kegerators are typically used in intimate settings like house parties or private soirees.

A kegerator has many different parts. One important part is the kegerator faucet. This spigot-like tap is the port of exit from the kegerator to your glass. The faucet can easily become the dirtiest part of the appliance so it needs to be cleaned regularly. And if you use your special beer fridge often, the kegerator faucet might need to be replaced at some point.

When that happens, here are five great options to choose from.

We want to make it easier for you to shop, we’ve added as much detail for each product we featured. When you continue reading below you’ll find not just product specifications but a list of the pros and cons for each. Also, be sure to click the yellow buttons below to see their best deals on Amazon!

The Perlick Beer faucet looks better than other taps in the market. The valve body is horizontally positioned in the faucet for and the 45-degree angle of the spigot. That means you get zero and overflow waste. When you think that beer is 50 percent foam, these are important considerations. Best of all, you don’t get the sticky problem commonly associated with stock faucets. 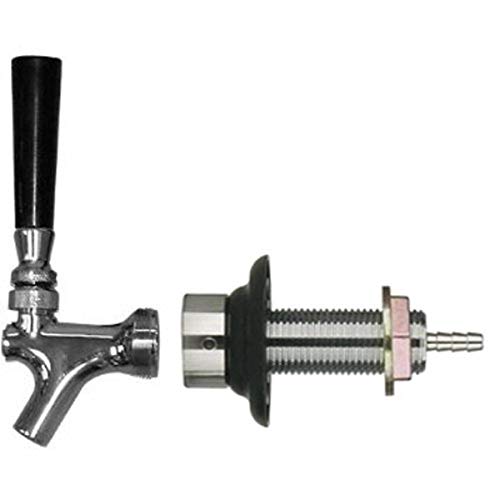 The Bev Rite Draft Beer Faucet and Shank Kit will look really well for a mini kegerator setup. It works as it should while being not as expensive as other kegerator faucets. It has a solid construction which means it’s highly serviceable even after you’ve run 10 or 20 gallons through it. With this faucet, you also don’t have to deal with the stickiness issue that happens with other stock faucets. Overall, this faucet and shank kit is a good buy if you’re looking for a reliable and budget-friendly product. 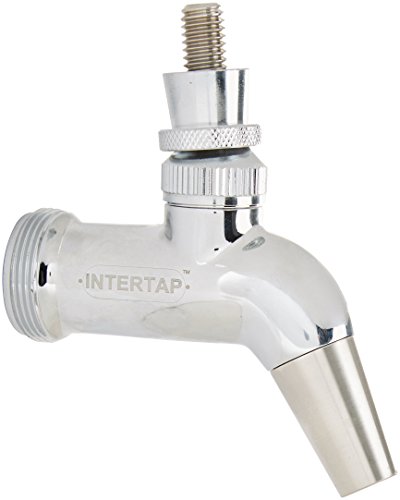 The Intertap Forward Sealing Beer Faucet is both versatile and cost-effective. You get a smooth operation, with no post pour dribble. With this kegerator faucet, you don’t have to deal with the stickiness issue that’s common in other brands. No forcing the handle to the point of breaking it, just to get the faucet to work. In terms of performance, it’s right up there with the best faucet brands. 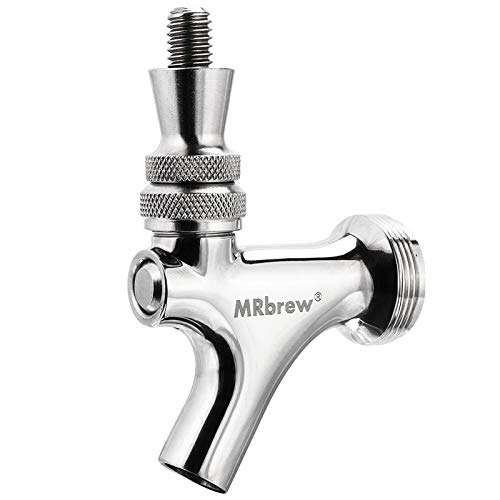 The MRbrew Faucet is heavy-duty and beautifully designed. The surface is not chrome-plated, but the stainless steel material makes the faucet body surface look shiny. With this product, you get less agitation and foaming than brass kegerator faucets. You also don’t have to worry about the faucet sticking so cleanup is much easier. All in all, it’s a durable product that offers good value for money. 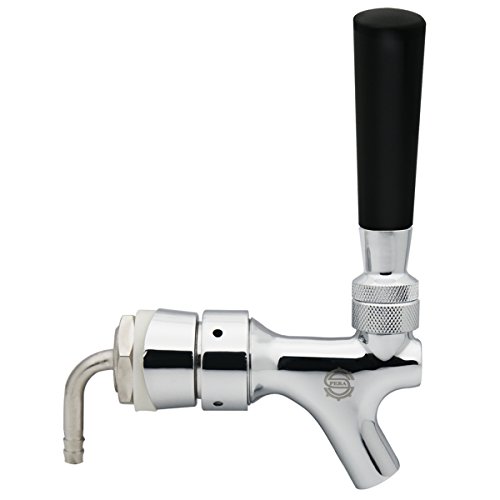 These PERA faucets work great. They come with a shank collar designed to fit a round riser but we substituted a 7/8” washer which fits the shank perfectly. This alteration allows the collet that the faucet attaches to float as is necessary for it to function properly. The spring that is included in the tap works well too. It ensures that your faucet is always closed when not in use.

The material your kegerator faucet affects your beer to some degree. Stainless steel, brass, and chrome are the most common choices. Stainless steel is a great choice for both durability and taste. Unlike brass, it’s less likely to develop stress fractures that can lead to breakage.

The kind of beer you like to drink also determines the type of faucet you should buy. While standard faucets work well on American ales and lagers, a European faucet would be more suitable for “slow pour” type beers like Guinness.

If parties at your house are more of a family affair, consider purchasing a faucet lock to go with your kegerator faucet. Faucet locks come in many different styles to match a particular type of faucet.

These can range from the simple ones that come with your draft system kit to the custom-made ones.

What are kegerator faucets made off?

Kegerator faucets can be made from chrome, stainless steel, or brass. The most common type of material you will come across is chrome-plated brass.

How often should kegerator faucets be cleaned?

It’s important to clean your draught line every two weeks (at least). Use an alkaline detergent cleaner to remove protein and film that build up quickly. The cleaning chemical should be recirculated through the product line for a minimum of 15 minutes at a velocity up to two gallons/minute.

What are the different types of beer faucets?

There are three main types. A standard faucet is the most common and is likely to be found on kegerators as well as the majority of commercial draft systems. It’s designed to dispense a wide variety of beers, including American ales and lagers. Typically rear-sealing, this it’s widely available in a variety of shapes, sizes, and finishes. It’s also designed for easy installation and can be swapped out with ease.

A European faucet looks and works in a similar way as a standard faucet. However, it has a longer and skinnier spout decreasing the overall amount of foam head in your pour.

Lastly, there’s the stout or nitrogen faucet. It is designed to accommodate a nitrogen-based draft system. It’s commonly used to dispense nitro beers and stouts, such as Guinness. This type of beer faucet has a very small, precise opening intentionally designed to allow for a very slow pour.

What chemicals are in the cleaning solution used to clean beer lines?